For the first time in four years, I’m not leading a yoga retreat in Yosemite…I think. There’s a chance I may do something in late Summer.

I do have a couple of personal excursions planned. Alone with a pack and a map. The thing I love about going to out there is that I get to face all of my fears.

As a kid, Golden Gate Park at night was the scariest place I could think to be. Although you can see straight through to another street from one side, even the Panhandle was too much. The Presidio wasn’t an issue. It was still an Army base. Tons of patrols and, besides, my dog was buried there. Until the movie Cujo came out, I was fine with it.

I guess it’s no surprise that I ended up loving Yosemite though. In college and even after I came home to SF, I’d spend as much time as possible in Griffith Park. I overcame a mild fear of heights (or really a fear of falling) on the super narrow trails that lead from a small parking lot in N Hollywood up to the Observatory.

I’ve pretended to be James Dean in Rebel Without a Cause and even touched the Hollywood sign.

In Yosemite, I’ve talked to Marmots in the morning, cursed mosquitoes in the evening and stood in the snow next to a redwood looking straight up thinking “holy sh*t that’s tall”.  Sometimes the history of the space is overwhelming.

Last summer, when I was invited to join a group on a climb to Denali in 2012, I thought why not?  But, I’m not an experienced climber.  I would just slow the group down.  Secretly, I like walking but I don’t like carrying packs.  I’m the consumer for valet climbing.  When I followed up and found out that the group was already full, I was a little relieved.

Expedition Denali is still going strong.  I may find myself in Alaska in 2013 to see the group off or just offer a little yoga when they return, who knows.  But, now, I have more inspiration and another aspiration. 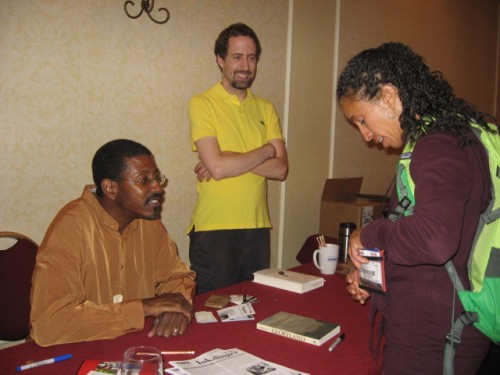 Special thanks to Chelsea Griffie (pictured here with Shelton Johnson (seated)-yup, he was in the Ken Burns documentary on National Parks) for catching me after taking a yoga class together and asking “Hey, do you want to teach yoga in Yosemite this Summer?”

I’ll say yes to anything right after practicing yoga.  Glad I did!

One thought on “Don’t call me Chicken!”